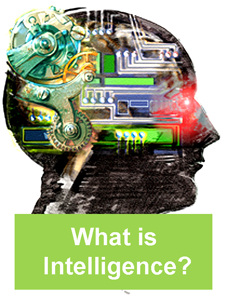 I was exploring the blog Beautiful Minds and came across a post "IQ and Society - The deeply interconnected web of IQ and societal outcomes" by Scott Barry Kaufman. This started with a definition of "Intelligence" which was published in the Wall Street Journal in 1994. I realised that I had started this blog without defining what I meant by intelligence - and I feel that the following definition served the purpose:

Intelligence is a very general mental capability that, among other things, involves the ability to reason, plan, solve problems, think abstractly, comprehend complex ideas, learn quickly and learn from experience. It is not merely book learning, a narrow academic skill, or test-taking smarts. Rather, it reflects a broader and deeper capability for comprehending our surroundings—“catching on,” “making sense” of things, or “figuring out” what to do.

Now I am not claiming that my attempt to model human intelligence demonstrates all the above properties - but I see the definition as a goal, and my model as being a step in the right direction.

The body of Scott's blog was doubly interesting to me because he was discusses the link between IQ ans social and educational factors while I have just been involved wit a FutureLearn course "Psychology and Mental Health" which explores and extends the "Nature and Nurture" debate. In many ways it looks as if IQ and mental illness are both correlated with one's life experiences and fit in with my approach to intelligence - which suggests that it  is mainly due to exchange of culture between humans, refined over many generations. On this basis someone with a high IQ will tend to have absorbed better quality cultural information when younger, while poor mental health will often be due to poor or disrupted cultural interactions and events.
Posted by Chris Reynolds at 15:46