The Cultural Origins of Language 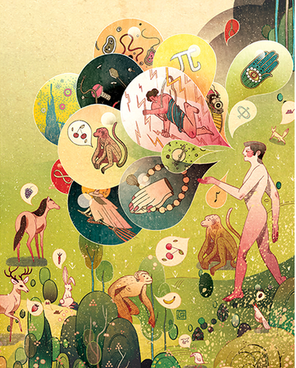 The Scientific American has just circulated a very readable article entitled "The Cultural Origins of Language" and highlights four main points. The aim of theis post is to relate each of these points to the evolutionary model I am developing.

Human communication is far more structured and complex than the gestures and sounds of other animals.

There is no disagreement on the points made here. The article points out that "Noam Chomsky, the extraordinarily influential linguist at the Massachusetts Institute of Technology, was, for decades, rather famously disinterested in language evolution, and his attitude had a chilling effect on the field." This is very relevant to my research. In the mid 1960s I started to look at how CODIL might support natural language - and took one look at the work of Chomsky and decided that CODIL and Chomsky's theories were incompatible and abandoned research in that direction. It is interesting that at about the same time I considered whether CODIL had anything to do with neural networks - and was discouraged by the views of Minsky.

Scientists have, however, failed to find distinctive physiological, neurological or genetic traits that could explain the uniqueness of human language.


Language appears instead to arise from a platform of abilities, some of which are shared with other animals.

The article says: "The problem is that after looking for a considerable amount of time and with a wide range of methodological approaches, we cannot seem to find anything unique in ourselves—either in the human genome or in the human brain—that explains language."  and later "Findings from genetics, cognitive science and brain sciences are now converging in a different place. It looks like language is not a brilliant adaptation. Nor is it encoded in the human genome or the inevitable output of our superior human brains. Instead language grows out of a platform of abilities, some of which are very ancient and shared with other animals and only some of which are more modern."

This is completely compatible with my work in that my model for the evolution of human intelligence start with the key assumption that at the biological level animal and human brains work in exactly the same way. The fact that my model predicts a number of weaknesses in our mental armoury which are compatible with an evolutionary approach suggests that this starting assumption has some validity.

Intriguingly, the intricacy of human language may arise from culture: the repeated transmission of speech through many generations.

The article discusses research on animals and concludes "The list of no-longer-completely-unique human traits includes brain mechanisms, too. We are learning that neural circuits can develop multiple uses. One recent study showed that some neural circuits that underlie language learning may also be used for remembering lists or acquiring complicated skills, such as learning how to drive. Sure enough, the animal versions of the same circuits are used to solve similar problems, such as, in rats, navigating a maze."

While I agree with what the article says about the importance of culture being passed, by, language from generation to generation there is a big difference. The article avoids discussing how the neural circuits of the brain drive language - while my model suggests a mechanism - and furuther information will be published on this blog shortly. However the underlying idea can be demonstrated by the following CODIL statement:

MURDERER = Macbeth; VICTIM = Duncan; WEAPON = Dagger.
At the neuron level each word is the symbolic name of a node *which could be very complex when examined in details), while the punctuation characters indicate the way the nodes are connected. A human reader of such a statement could easily translate it into a variety of different natural language sentences, and the CODIL language is powerful enough go most (if not all of) the way to allowing such transformations to be processed. Thus the model has the ability to represent information in a neural net and the potential to generate natural languages style sentences.
Posted by Chris Reynolds at 01:47