The Many Human Species revealed by DNA studies

When the early evidence that we contained genes inherited from the Neanderthals I posted a blog "More evidence for the braided human evolutionary tree" about the possible significance of  hominins splitting into separate groups and then interbreeding at a later stage.  A couple of months ago I blogged "Why Sex is an Important Factor in the Evolution of Human Intelligece" developing the idea further in terms of the transfer of culture as well as genes. The current New Scientist (13 October 2018) contains an article by Catherine Brahir entitled "The Ghost Within" which describes how, hidden within out genome are traces of unknown species of early humans. 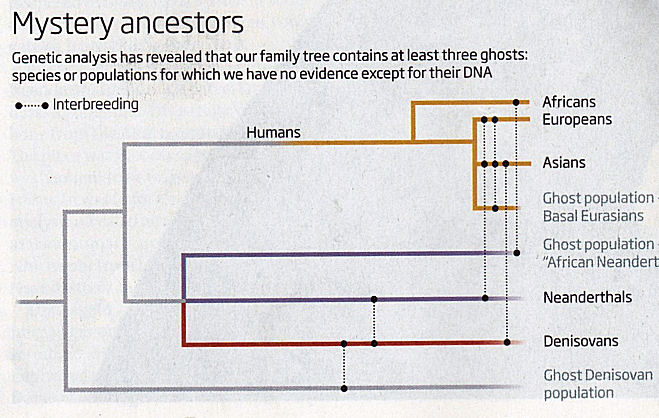 If one thinks about it, the fastest way for a slow-breeding species to evolve could well be to repeatedly split into different smallish groupmean s, where each group adapts to different environments and, in effect, "tests out" new gene variants. A degree of inbreeding will encourage both good and bad gene variants - but cross breeding with other, long separated groups will help to concentrate the better gene variations, and eliminate the less satisfactory alternatives.  In the case of humans this will not only have helped shape our physical bodies but will also have helped to merge the best features of different cultures.
Posted by Chris Reynolds at 04:36