Mental Health and the Brain Model 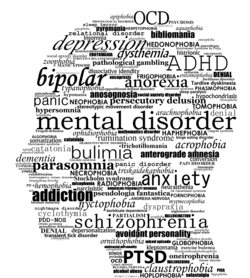 Because of my long term interest in mental health matters I recently decided to do a FutureLearn course on Psychology and Mental Health and the reading material included a paper by Peter Kinderman entitled A Psychological Model of Mental Disorder. This made me think that I should be looking at my evolutionary model of human intelligence to see whether it might be able to model some mental health problems. The model already predicts some weaknesses in how the human mind works in areas such as confirmation bias - so could it suggest possible causes for mental illness.


The evolutionary model is based on the idea that at the neuron level our brain works in exactly the same way as any other mammal but we have developed a tool, which we call language, to bridge over some of the weaknesses due to the way the animal brain has evolved. Some of these inherent weaknesses could underlie some mental health problems because the genetically evolved mechanism  is being asked to do a lot of extra work.

The following can be considered draft discussion notes looking at some of the areas which my model suggests there issues which could adversely affect mental health.

The above points all relate to the way that information is stored in the brain’s neural network – but the way information is retrieved may be relevant to people seeing visions or hearing voices. The “driving engine” in the model uses a window into memory which “contains” the top active nodes (up to about 7) representing the concepts were are currently under consideration. As we think about something the window dynamically moves through the memory network – both horizontally (looking at concepts at a similar level) of digging deeper to find more detail. I suspect that you sense “seeing” something when an appropriate node is selected to appear in the conscious window and I suspect that some people can “dig” deeper than others.  OK only an idea at this stage – but probably worth following up.
Posted by Chris Reynolds at 11:21