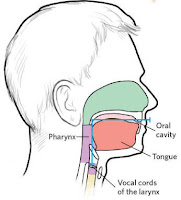 In considering the evolution of human intelligence I will obviously need to address the relationship between speech and language and a recent article "Why Human Speech is Special" by Philip Lieberman helpfully reviews what is known about the evolution of speech, and includes some useful references.
I will be discussing the role of language and speech in some detail when I complete the relevant section of my report on the last 5 million years of human evolution. However it would be helpful at this stage to use the subject to highlight the difference in approach my model takes.
My approach is to identify the mathematical logic used by the brain to store the information it collects and to make decisions, and it is not directly concerned with the physical form of the messages or the organs which detect/generate the message. In effect it assumes that all neurons use the same messaging logic so that, in theory at least, any part of the brain, at any level, can exchange messages with any other part. Of course some will be assigned special functions - such as processing sight, or controlling movement - and have different inbuilt connections at the generic level. As with any other organ of the body, the relative size will depend on the evolutionary demands on the species and there will be accompanying genetic changes. If evolutionary pressures favour changes to the vocal organs one can expect changes in the parts of the brain most intimately involved - but my model predicts that the internal communication language that the brain uses will remain unchanged.
Of course no-one can deny that the fact that language plays an important part of the evolution of human intelligence. However in information flow terms there are many different ways that animals might communicate if the evolutionary pressures are right. Once an effective communication route has opened the language would evolve at a rate appropriate to the evolution of culture - which is far faster that genetic evolution. This raises the question which came first? Evolution often develops new features by modifying existing features, and the important thing is to understand the evolutionary pressures that brought on the changes.
In the case of speech there appear to be two alternative for the origins of :an effective communications language
On the evidence I have so far the information flow model would suggest that the later is the more likely. If you know of any evidence which points either way please feel free to comment below.
Posted by Chris Reynolds at 02:22