Modelling how the Human Brain Works 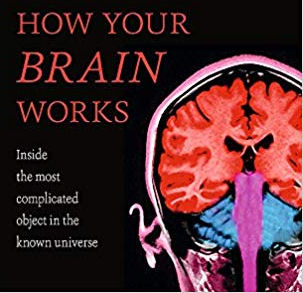 On the FutureLearn course "Psychology and Mental Health" I am currently following I have just reached a section which starts:
The New Scientist has a very good, user-friendly, account of the human brain and how it works.
I would be the first to agree that the New Scientist is good at explaining science in easily readable terms – having been a fan since I brought a copy of the very first issues when I was a student. Its web site has good descriptions of the brain, and its components, and other aspects of modern brain research. However there is a glaring omission – there is no overall description of “how it works” which explains how the neurons in the brain work together to support intelligent human mental activities.
The New Scientist is not alone. The Scientific American has just published a special issue “Humans: Why we’re unlike any other species on the planet” which fails to answer the same question. In fact you can read book after book about the brain, and also many research papers, and while there are a number of purely descriptive surmises, the best answer you can get is that there is currently no adequate predictive model of how the brain’s biological computer actually works to convert activity at individual cell level into a system capable of doing what the human brain can obviously do.
I am currently working on "An EvolutionaryModel of Human Intelligence “ which attempts to show how activity at the neuron level supports the high level mental activities which characterize the human species and it is perhaps appropriate to add my ideas on the subject with outline details of my research.


I would suggest that the current mystery about how the brain works is simply a repeat of history. We believe we are something special and for many centuries we believed that the Earth was the centre of the Universe. Before Darwin we believed that the physical human body was a special creation – but we now know that biologically we are animals with very similar genes to our nearest ape relatives. But surely we must all think that our brain is something exceptional – and if we try hard enough we might find the magic genes which makes our brain unique.  The New Scientist, by the wording on the cover of its Instant Expert book, clearly the brain is the most complicated object in the known universe.
Of course the very detailed research that has been carried out throughout the world on the brain has proved very valuable in fields such as medicine and provides intricate details of some of the internal workings. But digging deeper and deeper to try and find the philosopher’s stone of intelligence will not succeed if the “marvellous” biological feature that makes us fundamentally different to animals does not exist. Perhaps the solution is to stand well back – and make no assumptions about how clever we humans think we are.
Before exploring this further let us consider an analogy. The basic function of the brain and the stored program computer have one thing in common. Both accept information, process it, and then use the  result. In a computer the input is a program of program of rules and some data which corresponds to those rules. The output is processed data in a form that is more useful than the original data. There needs to be a processor to interpret the rules and a media on which the rules and the data are recorded. In terms of understanding the basic principles of how a computer works it does not matter whether the computer is made of clockwork (as Babbage tried to do), or valves, or some kind of fancy electronics. It also does not matter whether the data is stored on paper tape, in an electronic delay tube, an array of ferrite rings, or a modern memory stick. The output data might appear on a video screen, be printed on paper, or used to control some mechanical device – perhaps a robot.  Of course the usefulness of a particular computer may be critically dependent on the components from which it is made – and what it does will depend critically on the program – but in every case the underlying concepts are is the same.
So let us forget about the particular chemical and biological structures which make up the brain and ask what are the underlying concepts for a “biological computer.” We know that every animal brain accepts messages from the environment through its sense organs, and its output are messages which control the animal’s body in a way which, hopefully, will maximize the chance of survival. While the brain may have some minimal built in program - called instinct, in effect each animal brain has to build its own program, and learning is a time consuming process. In addition the brain needs a lot of energy to function. When the animal dies the program it has carefully built over its life is lost.  In effect the high cost of learning put a cap on the size of a brain as no species is going to evolve a brain bigger or cleverer than it needs to maximize survival chances.
Humans appear to be exceptions but while they use their brains in a different way there are no significant differences at the biological l(i.e. genetic) level. Of course human brains are bigger and may pack in more neurons, but is a bigger brain in an animal which uses its brain a lot any more significant, in evolutionary terms, than a giraffe’s long neck or an elephant’s trunk. If humans use their brain more than other animals one would expect the brain to get bigger. But simply increasing the size does not automatically alter the way it works. The important thing that makes humans different is that when a human dies a significant amount of the information it has learnt during its lifetime can be passed to the next generation, using language.
So let us assume that (apart from size factors) our brain works in the same way as a typical animal brain – with no “aren’t humans super-special” features – and that the key issue is how to understand how humans learnt to transfer information from one generation to another.
This is where my earlier research becomes relevant, although when it started it had nothing to do with the brain – but a lot to do with how we use our brains to carry out complex tasks. In 1967 I was a systems analyst looking at one of the most complicated commercial computer applications then in use and I came up with an unconventional suggestion as to how this might be changed to allow the sales staff to take control once computer terminals became available. Within a year I was working for a computer manufacturer on the design of a novel type of computer. The idea was to have a computer with a user-friendly symbolic assembly language which, if built, would allow the human and the computer  to work together on tasks which were difficult to predefine. But this research led to the development of the CODIL computer language which was tested on a wide range of applications, including a heuristic problem solver, TANTALIZE, which solved 15 consecutive New Scientist Tantalizers (a weekly brain teaser for humans) and a version, MicroCODIL was trial-marketed as an educational package and received many favourable reviews. Unfortunately the computer industry believed that the way forward was with the incomprehensible black boxes which we all now take for granted, and active research on CODIL stopped in 1988..

2.      Assume that it was no more than an interesting idea – but that at least some of the paperwork about attempting to build an inherently human-friendly computer could be worth archiving for those interested in the history of science,

3.      Continue with the blog, filling in the gaps, answering questions, commenting on how my model compares with other research, etc. in the hope of finding younger people who would like to explore the ideas further while I am still able to give help and advice. If there is enough interest appropriate arrangements could be made for archiving any relevant research notes.
So dear reader, having got this far, why not comment below to let me know what I should do –  or you could ask a question about how my model will relate to other brain-related research– and if you include accessible links to relevant online material I will blog post a reply. After all the best test of my research is how it stands up to critical questioning.
Posted by Chris Reynolds at 09:19