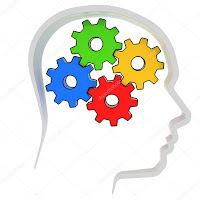 As a scientist  I feel I must always be open to different ways of looking at my research and as a result I have decided to do the Future Learn Course "Matter and Mind: A Philosophical Understanding" as I am sure that the views raised by the course, and in student discussions, will be thought-provoking. It therefore seems to be a good idea to record what I currently understand by the terms "Mind" and "Consciousness" before I start the course.
Google provides the following definitions, which I find satisfactory.

The brain model I am using assumes a network of neurons recursively organised into higher level nodes which hold the information the brain has about the environment in which it lives. Messages come in from the sense organs which are passed into the network and most rise until a point where they are recognised and can be handled automatically. However some more important messages reach the effective top of the network.
In this framework the "mind" can be considered to be the sum total of knowledge held in the network, while "consciousness" is the awareness of the active messages that have risen to the top - in effect the messages in the brain's "working memory." Of course human working memory has a limited capacity of about half a dozen items, and we can get confused, and forget what we were doing, if too many messages become active. In addition a very important message (say someone shouting "Fire" in your ear) can become dominant and trigger appropriate emotional responses. In addition to responding to external inputs we can simply think about a task and guide our "consciousness" window on a tour of the "mind" - in the process remembering the past or reviewing the present.
There are two immediate conclusions from this model:
Posted by Chris Reynolds at 02:27